In December 2010, a baby girl was born into an ordinary family in Handan, Hebei. Her parents named her Tongtong (彤彤) in the hope that her life would be smooth and her rosy face always filled with carefree smiles.

Tragically, it became evident in her first few months of life that Tongtong was not growing normally. She suffered from a series of ‘Tet spells’ and would frequently become deprived of oxygen, turning blue and passing out whenever she cried or strained. She was slowly dying.

Tongtong’s family had extremely limited access to medical care. The local doctor, experienced but lacking advanced medical training, suggested that Tongtong might have a heart condition. Without access to even basic x-ray imaging, it was clear that a more comprehensive examination in a large city hospital was desperately needed. Tongtong’s parents immediately became aware of the cost implication for the whole family. 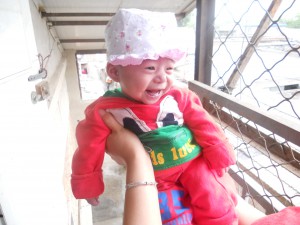 Their options for private healthcare were prohibitively expensive. Basic tests and investigations immediately ran up bills of over 10,000 RMB, already an unthinkable number for a household with a combined income of 2,000 RMB per month. Corrective surgery was going to require further resources in the range of 100-200,000 RMB. Given the sheer hopelessness of their circumstances, Tongtong’s parents initially had no clear plan for treating their sick child. Some members of their extended family even suggested abandoning Tongtong given that she was a girl, a practice which is not uncommon in poor rural areas of China.

Jia Liu, one of SSCF’s founding members, had been a colleague of Tongtong’s father before he lost his job. When she learnt of the family’s dilemma, Jia volunteered to help and assembled an informal working team that included Jingjing Zhou and Dr. Christopher Hui. The team then contacted over thirty domestic and international charities on behalf of the family, liaised between the family, doctors and hospitals, and organised fund raising.

With the help of many other kind people who donated time, effort and money, they were able to secure access to the best medical resources and raise sufficient funds to save Tongtong’s life.

Tongtong underwent successful surgical correction of her condition on July 5th, 2011 at Beijing’s Anzhen Hospital and is now healthy and growing rapidly. Jia and Jingjing paid a visit to the family in September 2011, finding a healthy Tongtong and extremely grateful parents.

The inspiration for SSCF arose from the obstacles met by the three founding members when they helped save the life of Tongtong.
On behalf of Tongtong's family we would like to offer sincere thanks to those who have dedicated considerable time, effort and support and to those who have made generous donations to grant their baby a new life!